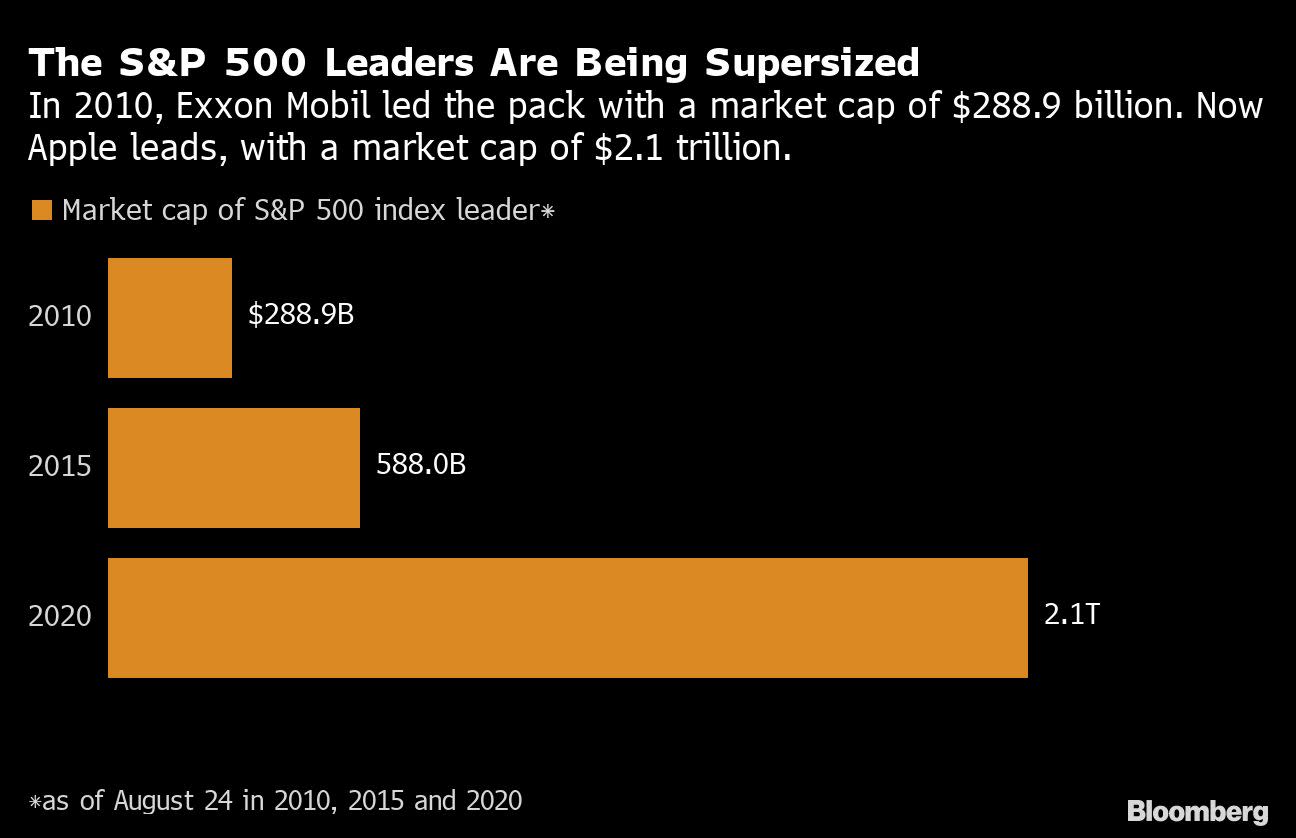 American Investors Have a Whole Lot Riding on Big Tech

(Bloomberg) — Many Americans have hitched their financial future to Big Tech, whether they realize it or not.

Just five companies make up about 24% of the S&P 500 Index — Apple Inc., Amazon.com Inc., Microsoft Corp., Facebook Inc. and Alphabet Inc. — up from 17% at the start of the year. That means a significant chunk of Americans’ net worth and the security of their retirement may hinge on the success or failure of a handful of stocks.

Some financial advisers, nervous about the exposure, say they are struggling to get clients to switch things up.

“Having been through one tech wreck, this certainly keeps us up at night,” said Thomas Yorke, a managing director at Oceanic Capital Management in Red Bank, New Jersey. “For now, we have been carrying larger cash allocations to try and offset tech exposure.”

In an attempt to spread out risk across stocks and sectors, many 401(k)s, pensions or other retirement savings plans use passive funds that mimic the S&P 500. But the massive run-up in a few blockbuster stocks leaves investors far less diversified than they may think.

The leading stock in the S&P 500 carries more than twice as much weight now as it did a decade ago. Today, Apple accounts for 7.2% of the index, while in 2010 Exxon Mobil Corp. was on top with about 3.2%. On Monday, the oil and gas company was kicked out of the Dow Jones Industrial Average, making way for even more tech companies such as Salesforce.com Inc.

In addition, some of the largest actively managed mutual funds in retirement savings plans such as 401(k)s hold highly concentrated tech positions. As of June 30, three stocks — Amazon, Facebook and Microsoft — made up 23.7% of the $128 billion Fidelity Contrafund.

Meanwhile, more people are buying tech stocks on the side, as the rise of a new generation of retail investors trading commission-free on mobile apps coincides with new services that allow investors to buy portions of shares. These fractional shares, as they’re known, make the highest-priced stocks suddenly within reach.

For example, if you had $500 to invest, you previously wouldn’t have been able to afford a share of Amazon, which was priced at $3,346 as of Tuesday. Now, companies like Charles Schwab Corp. or Stash Financial let people buy $5, $1 or 5 cents worth of a stock.

Other investments have also camouflaged tech. Berkshire Hathaway Inc.’s stake in Apple has swelled to about $122 billion and at the end of the second quarter made up some 44% of its stock portfolio.

So far this year, the exposure has been lucrative. The five big tech stocks gained an average of 53%. The median change for all S&P 500 stocks? Negative 5%.

And the expectation that working and shopping from home will be far more common in coming years is one reason why some are confident that big tech stocks are well worth their valuations.

Wedbush Securities raised its price target for Apple on Wednesday to $600 from $515 on optimism about the upcoming 5G iPhone. Oaktree Capital Group co-founder Howard Marks, meanwhile, spent a good portion of a mid-August investment memo reviewing bullish arguments about the valuations of Big Tech companies.

Nevertheless, some financial advisers are nervous about their clients’ mounting exposures. Persuading customers to trim positions “can be a chore” if they will have to pay capital gains taxes, Yorke says.

Advisers are recommending that people hedge or move money into less expensive areas of the market, like small-cap stocks and international stocks.

They’re also hearing from people who are normally conservative but are fearful of being left behind. Wealth manager Kenneth Van Leeuwen of Van Leeuwen & Co., in Princeton, New Jersey, had some clients ask, hopefully, if they owned Amazon. The answer was no, but they do own Apple, which he thinks is a better value, and has a dividend, unlike Amazon.

bloomberg.com” data-reactid=”48″>For more articles like this, please visit us at bloomberg.com